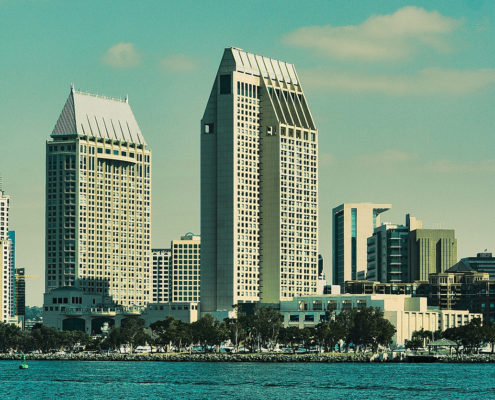 The goal is spurring developers to build housing for a group of residents that make too much to qualify for subsidized housing, but not enough to afford the high-end housing projects that developers prefer because of wider profit margins.

The program, which the City Council is scheduled to approve on June 26, continues a series of new policies proposed by Mayor Kevin Faulconer to address a shortage of affordable housing in San Diego.

Previous legislation has loosened regulations on “granny flat” add-on unit construction, streamlined environmental reviews for some projects and expedited approval of projects that include homes that are subsidized for low-income residents.

Critics have raised concerns the program would discourage developers from continuing to build subsidized units for low-income residents. Some are also worried existing low-income projects would be torn down to make way for new middle-income projects.

The program would give developers density bonuses and other incentives, such as reduced parking requirements, if at least 10 percent of the units in a project are reserved for middle-income residents.

A new classification not previously defined by the city, “middle income” would be two-person families earning less than 150 percent of the city’s median income, which is $73,500 for a two-person household.

So a family of two making less than $110,250 would qualify for a middle-income unit, which could be either rental apartments or for-sale condos or townhomes.

The density bonus for such projects, which would also have to be built near existing or planned transit routes, would be 25 percent. Density bonuses allow developers to build more units than the existing zoning allows.

To avoid discouraging developers from including units for low-income residents in their projects, the density bonus of 10 percent for doing so could be combined with the middle-income density bonus.

So a developer who builds units for low-income and middle-income residents in a project could be allowed to construct 35 percent more units than the zoning for the area allows.

Supporters predicted the program would make a big difference during a public hearing held last week by the council’s Smart Growth and Land Use Committee.

“It’s an essential component to the overall goal of increasing housing stock,” said Matt Adams, vice president of the local chapter of the Building Industry Association.

Mary Lydon, spokeswoman for a nonpartisan coalition called Housing You Matters, said the lack of workforce housing is a threat to the region.

“Building homes for our essential workers like police, firefighters, nurses and teachers will help make sure we have a well-functioning economy,” she said.

Mike Hansen, the city’s planning director, told Gomez such language would be added by the June 25 hearing before the full council. Hansen also agreed to eliminate a low end to the definition of middle income.

Initially, officials had wanted to define middle income as anywhere between 120 percent and 150 percent of the city’s median income. But they will instead define it as any income level below 150 percent of the median. The difference is expected to matter in low-income neighborhoods such as San Ysidro and southeastern San Diego.

How to Build Momentum on Housing Policies